On one hand to begin the project it is key for us to get into the foundations of Chinese culture and its visual universe. We have studied different concepts such as the traditional architecture’s temples and their powerful horizontal lines, the trellises’ and their textures used to control the privacy at the time; understanding as well the flows of energy, like feng shui; and social topics such as the mythological dragon figure.

On the other hand before starting the project, we have performed a detailed territorial and environmental analysis. Studying the site position in respect to the main routes that connects it with the city of Huizhou and Bolou, its surroundings and also the environmental problems. The project tries to solve the excessive pollution, exploiting natural energy, harvesting rainwater and using wind and solar energy.

Considering all these points, some bioclimatic decisions that affected the distribution of the whole set are taken. The initial program consisted in 20 residential towers, a mall, apartment building, a hotel and offices tower.

Our first decision was to group the housing towers in two lines, with a staggered arrangement, forming a double perimeter line and leaving a large green space in the site centre. The concentration of a big green space  enhances the CO2 consumption and improves the users air quality.

The towers’ position in the general plan allows for the north’s wind to flow through and inside of the plot helping the environment’s humidity evaporation. The position of the mall, hotel, and apartments in the south of the plot generates a noise barrier from the main highway, and gives the green housing area a quiet environment.

To facilitate sunlight in homes and their green exterior we projected a varied tower height depending on their position. So the whole set grows in height from the south, where the lower towers are placed, to the north and outer perimeter where there are the higher ones. This move generates dynamism, reminding us the dragon drawing, crowned, as his head, with the hotel tower as the most iconic part of the project.

The housing tower floor type, is presented as a 21x28m rectangle with rounded corners that generates a continuous terrace, which changes its width organically. That gives us a typology adaptable and flexible to the interior space needs.

The proposed towers have protruding slabs highlighting the horizontality  and with different lattices’ types on its perimeter. This will generate a double skin, which will control the privacy, protect from direct sunlight and promote a greener facade, where the plants can be part of it.

The hotel and office tower by contrary, arises with a tougher facade with predominant glass,  which will change its tone and is understood as an attractive feature, which also maintains the slabs flatness of the rest of the towers. 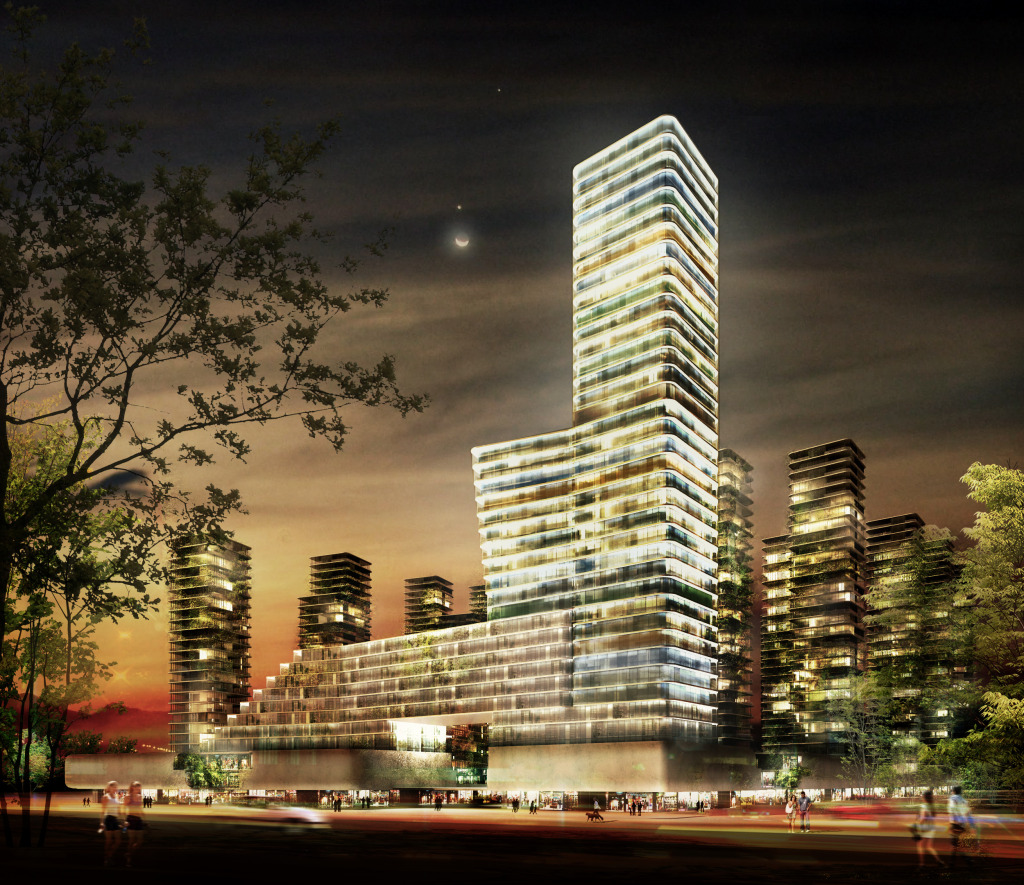 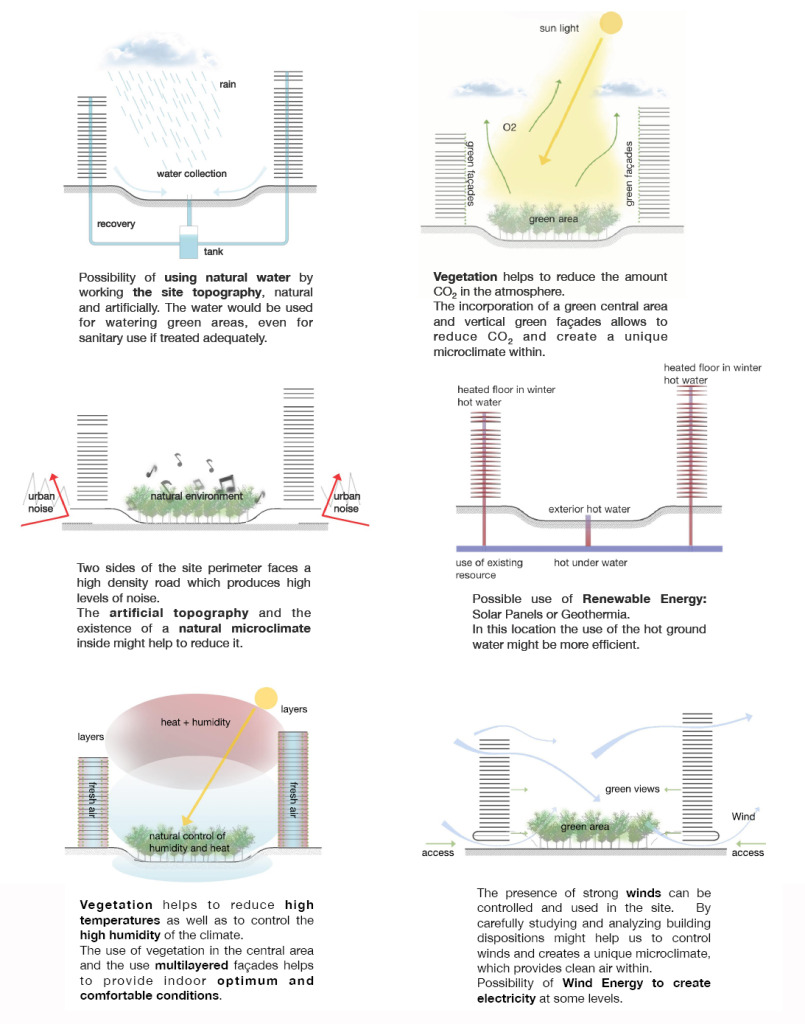 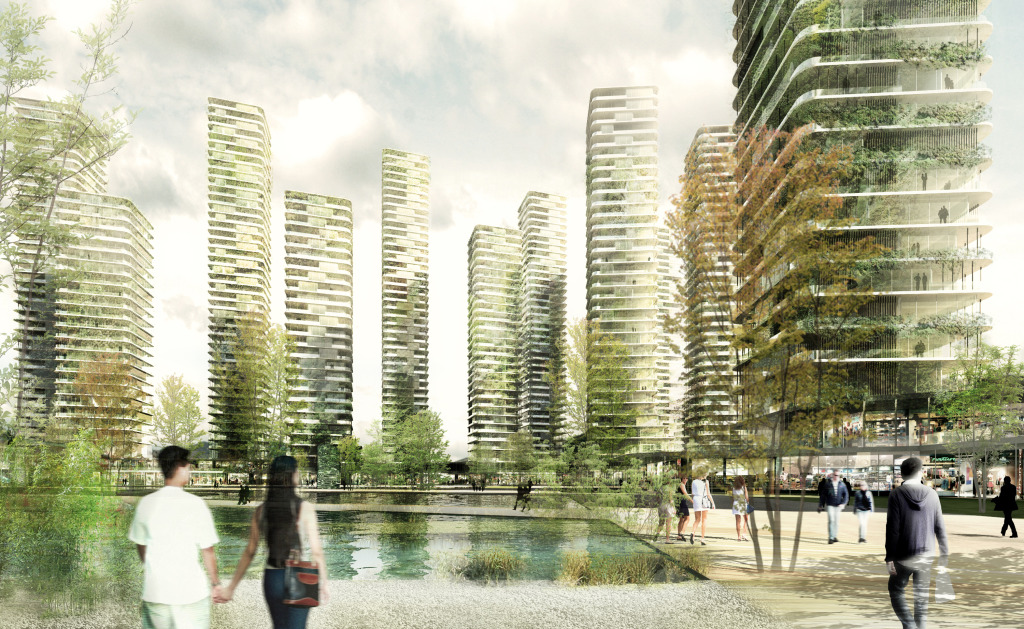 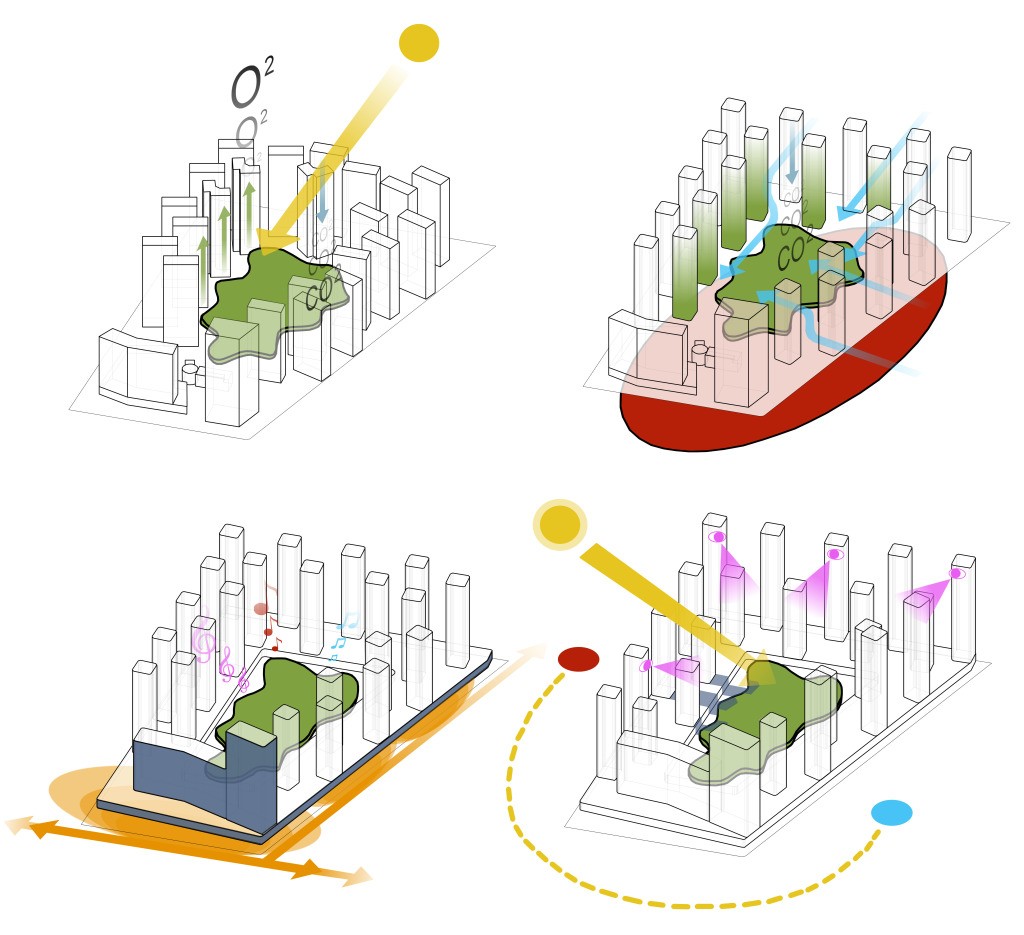 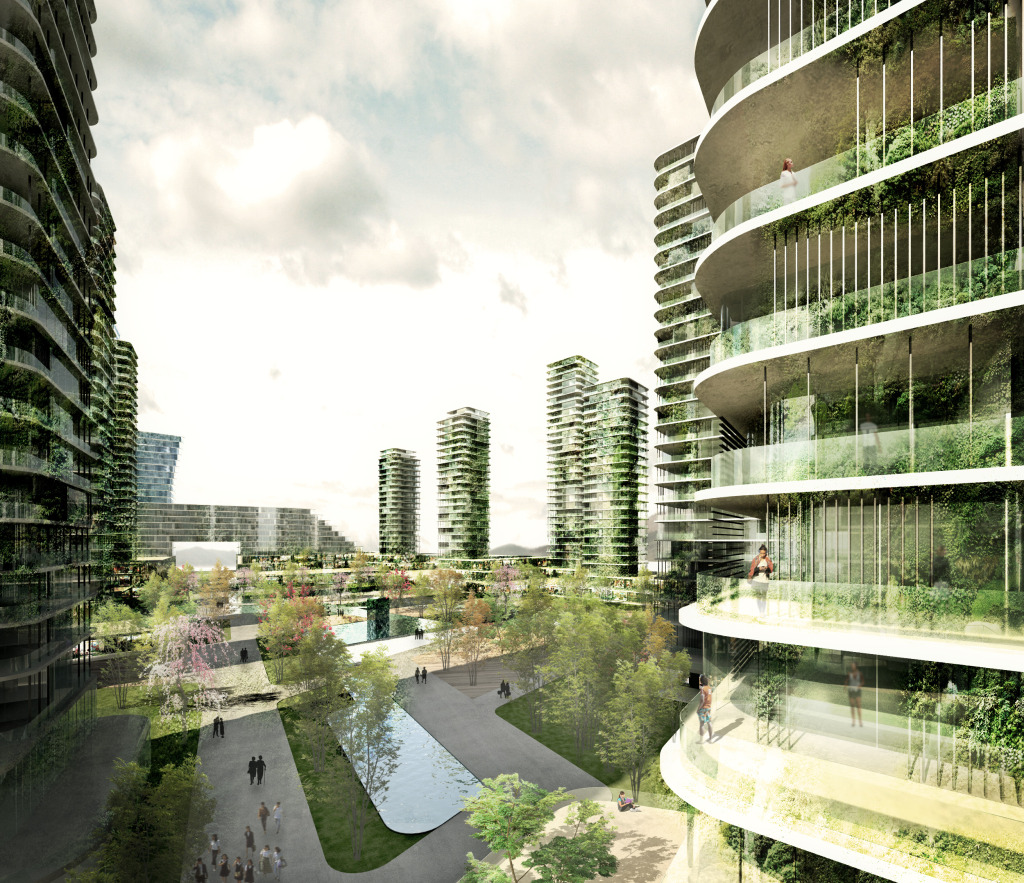 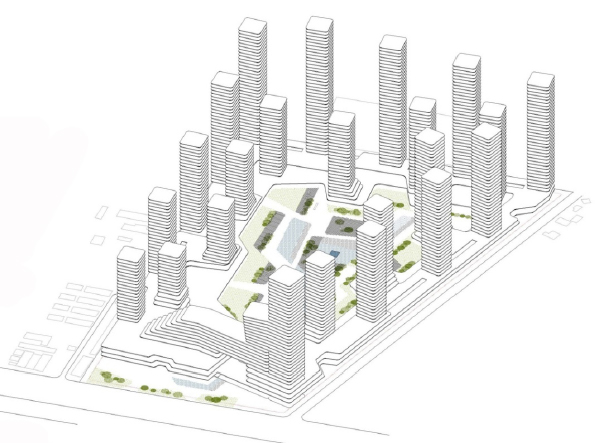 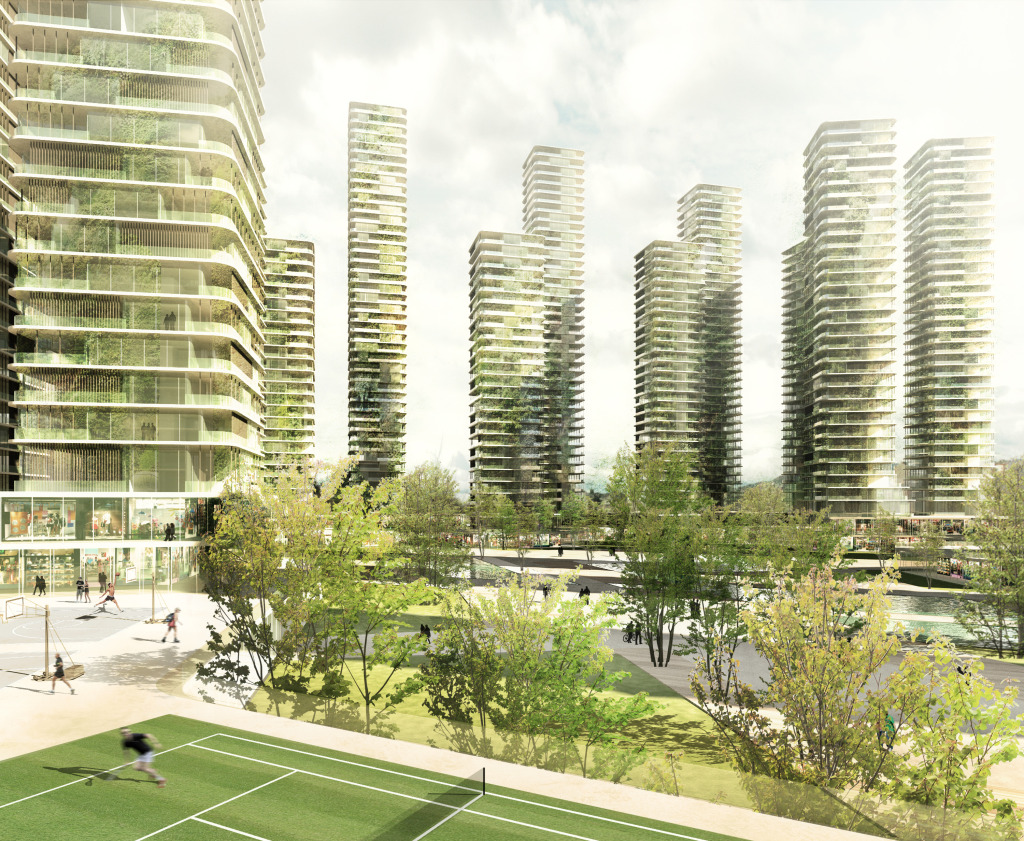 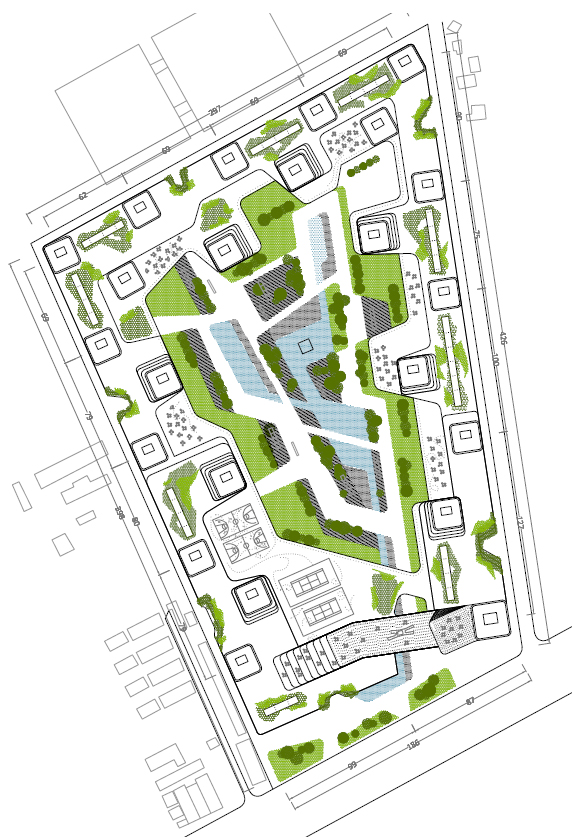 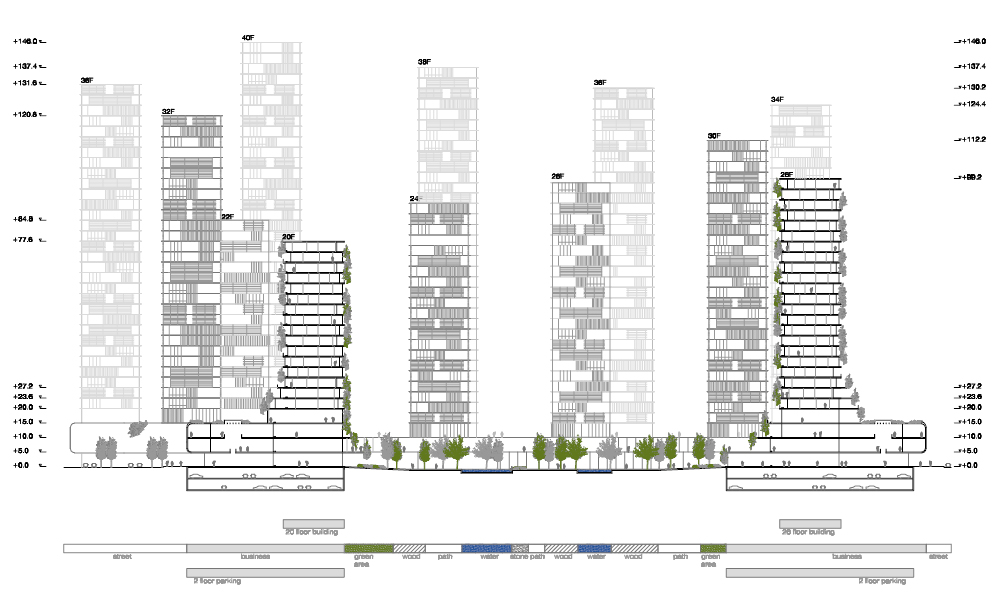